The best hot cocoa recipe is much more than getting the right ingredients together. It’s not about being overly complex or adding a lot of different flavours to the mix. Making a perfect cup of hot chocolate requires patience and commitment to getting the recipe just right. You can’t be satisfied after a couple of tries. You work at it each time making it better (or worse) until you come to the point where nothing more can be done to improve it. My best example of this is my cinnamon hot chocolate recipe, which is much simpler than my other hot chocolate recipes, but it has the best balance of all.

Balance is crucial. You want everything to mix just right. If you go far out on one ingredient, you need more of another to restore balance. You can achieve a balance of flavour by stripping down ingredients or by adding more. Going too high or too low results in a lack of balance, so even the most complicated hot chocolate can still taste like they are missing something. Balance is important across the board with not only the flavour of hot chocolate, but also the mouthfeel, the body, the depth, and the temperature. It’s with these key factors in mind that I created this hot chocolate recipe with cinnamon. I use just enough ingredients to create balance and promote the fullness of just the right flavours.

This easy cinnamon hot chocolate recipe offers creaminess, warmth, sweetness, and a hint of spice that lacks nothing. In my opinion, it’s the best cup of hot chocolate. Part of the key is the ratio of chocolate chips to cocoa. This recipe for hot chocolate serves four, which is perfect for sharing or indulging during a cold night in, with a warm fire and a book (or Netflix).

How to make cinnamon hot chocolate

For more hot chocolate recipes, check these out:

I hope you enjoyed my Cinnamon Hot Chocolate as much as I did! If you make it, please share your photos with us on Facebook or Twitter! Also, check out all of our other recipes! 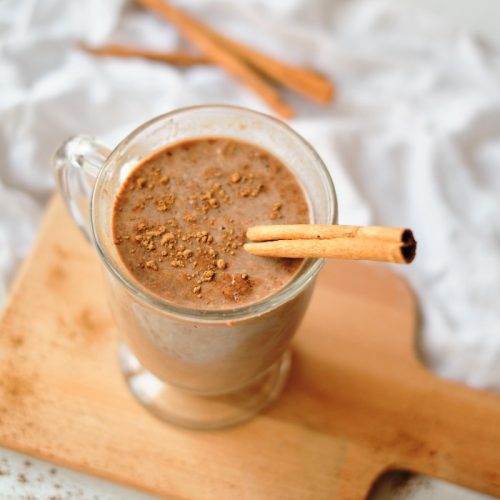 What to Bring for a Day at the Beach

How to Plan for Stress Free Air Travel