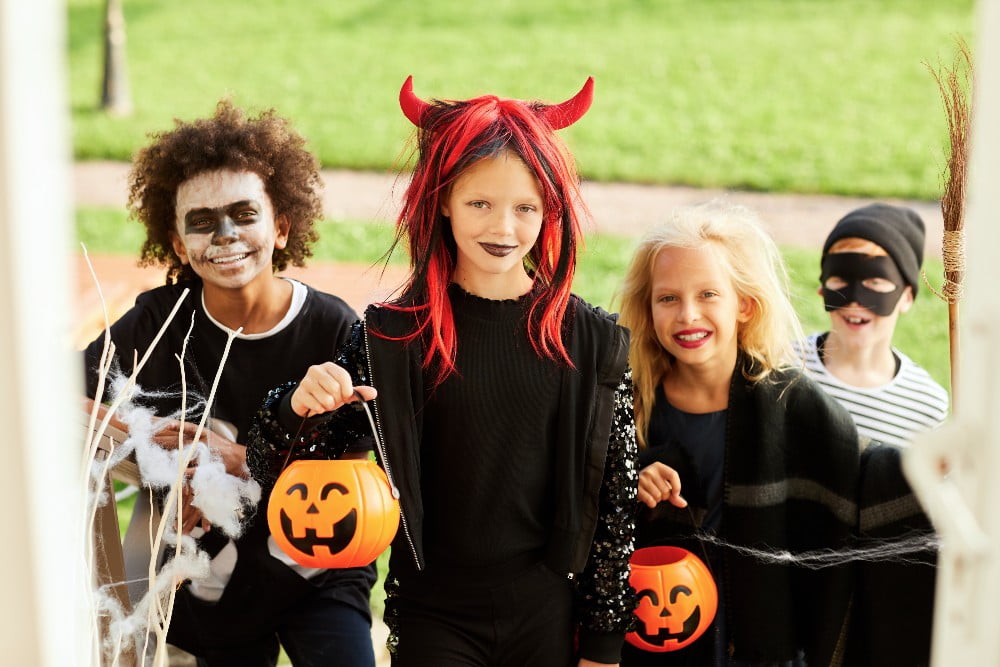 Home » Family » Why Do We Give Out Candy On Halloween

Why Do We Give Out Candy On Halloween

When my kids where younger, they asked why do we give out candy on Halloween? That’s a very good question! It brought up a discussion on the history of Halloween and its origins. Do you know why we do this?

WHY GIVE OUT CANDY ON HALLOWEEN

The roots of this tradition of giving out candy runs back much further than children getting candy from neighbours. Originally known as Samhain, this day celebrated the last day of autumn and prepared the ancient Celtic pagans for the cold and arduous winter months to come.

It used to hold that the day started at sunset and ended the following sunset. Samhain started at sunset October thirty-first and ended sunset November first. It involved a great feast, a parade, a bonfire, and sacrifices to the deities of the Otherworld that no spirits harm their families. It was thought to be that during this time those trapped in the bodies of Animals were released into their next incarnation. The masks and costumes were worn to hide one from vengeful souls. Food (treats) were left on the front doorstep that the vengeful souls may deflect to another house and not cause harm to their families.

However, in an attempt to “cover up” any pagan roots of the major Sabbats (pagan holidays) around 800 AD, Pope Boniface IV designated the first as “All Saint’s Day” and the thirty-first as “All Hallows Eve”. 200 years later, the second of November became known as “All Souls Day”, a celebration similar to Samhain. A bonfire, costumes, and parade were celebrated once again. Samhain was sort of revived, except this time the poor of England would beg for food. In an attempt to help the poor, a pastry was created called a “soul cake” and was given to the poor that they might pray for the families dead relatives.

The processing and distribution of these “soul cakes” were highly encouraged by the Church to replace the tradition of leaving food for the new incarnates. This became known as “going-a-souling” and the children highly anticipated going from house to house collecting food, money, and drink. When the English settled in America, obviously the tradition stuck. Even today, children are going from door to door, unknowingly collecting their “soul cakes” and unknowingly are sparking up an ancient pagan tradition.

Know that next time a child comes knocking at your door asking “trick or treat”, you can think “going-a-souling” and take pride that such an ancient tradition made it through over twelve-hundred years of persecution. Also note that all of the “changes” really did not make an impact on many of the original traditions!

Next Halloween, when you’re passing out soul cakes (candy) for prayers, do some reading into what the ancient ways are really all about!

The History and Evolution of Baby Showers — What’s Popular Today?

How To Save Money For Your Child’s Medical School

The History and Evolution of Baby Showers — What’s Popular Today?

10 Foods to Avoid if You Want to Lose Weight

Family Volunteering: A New Way to Travel this Summer