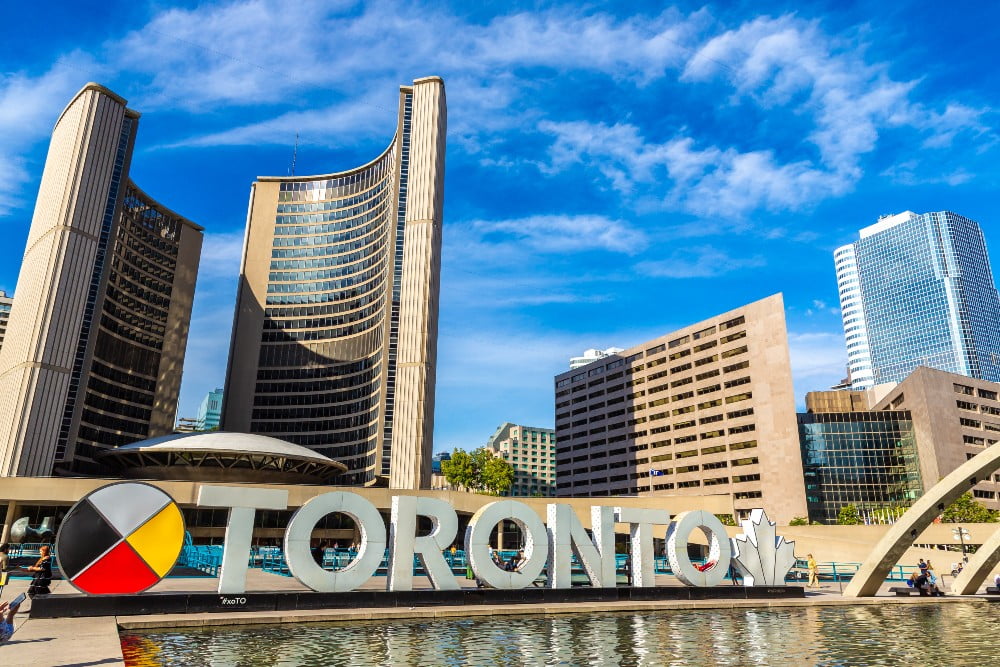 Every city, town or village around the country has something that makes it unique or different from others. If you live in Ontario, then you will be familiar with Toronto (capital of Ontario) and all it has to offer. Whether you have been there, live there or have wanted to visit, get out and discover these many interesting facts about Toronto.

Toronto, Ontario was incorporated into a city in 1834. The land that it sits on was inhabited by many different Indigenous peoples long before that time. Although the name comes from 4 different languages, it originated in the area between Lake Simcoe and Lake Couchiching known as The Narrows around the 1600s.

Tkaronto – Mohawk for “where there are trees standing in water.”

Ouentaronk – Huron for “poles spaced over a distance or “poles that cross.”

Although the name originated in the area now known as Orillia in the early 1700s, it moved south and became associated with a post by the mouth of the Humber River, the starting place for the “Carrying Place,” the canoe and portage route from Lake Ontario to the waters that flowed into the upper Great Lakes.

Toronto is one of the most multicultural cities in the world. There are well over 100 languages and dialects throughout the city. It offers a variety of fun and entertainment spots such as 8000 restaurants, 500 live music venues, festivals and over 100 attractions. Toronto is at the heart of film and television production in Ontario. The city also hosts 7 major sports teams.

The attractions in Toronto is what appeals to tourist to keep them coming back. There is a variety of attractions for both kids and adults depending on what you like to do and really it depends on the season.

When visiting the Capital of Ontario whether you have kids or not you will definitely want to visit these Toronto main attractions! Ripley’s Aquarium of Canada, Ontario Science Centre, and perhaps the Toronto Zoo. Enjoy a panoramic view from the top of the CN Tower or head on over to The Royal Ontario Museum and visit the different displays currently available. If it’s August the most famous attraction to visit would be the Canadian National Exhibition.

Before heading to the city, read below and enjoy these weird facts about Toronto.

1. Toronto became the largest city in Canada, surpassing Montreal in the 1970’s.

2. Did you know this interesting fact about Toronto? The CN tower was built as a telecommunication tower so signals would not be blocked by the financial skyscrapers being built in the downtown.

3. According to the 2006 demographics census of downtown Toronto the largest ethnic group identifies with British heritage… the second largest is Canadian.

4. Cold water from the depths of Lake Ontario is used to air condition several office towers in the downtown.

5. Ernest Hemingway briefly wrote for the Toronto Star newspaper in the 1920’s.

6. Superman’s co-creator Joe Shuster was a Toronto native that brought the influences of his hometown to the comic. Newspaper names The Toronto Daily Star (The Toronto Star present day) and Global and Mail were meshed to bring about Clark Kent’s employer the Daily Planet. Now that’s one of the many interesting facts about Toronto!

7. Mountain Dew in Toronto is caffeine free because of a regulation that was recently eased that said only cola’s can have caffeine.

8. Most pop is flavoured with sugar instead of corn syrup giving it a slightly different taste.

9. Toronto is in one of the regions in Canada where most people purchase milk in bags at the grocery store.

13. Queen Street crosses Victoria street one block east of Yonge to form  intersection of Queen and Victoria which is the monarch both streets were named after.

14. Attention to bilingualism has resulted in street signs like “ONE WAY”, “YIELD”, and “DO NOT ENTER” that lack the wording and just have the symbols.  STOP signs however still have S-T-O-P written on them.

15. A flashing green light means you can drive straight or make a left.

16. Toronto’s Pearson Airport has night restrictions on different aircraft depending on their noise level. Between 12:30am and 6:30am, only 3% of scheduled flights are allowed to take-off or land including cargo and passenger planes.

17. The kilometers of parkland running up the Humber and Don rivers is preserved as a flood protection measure. In the 1950’s squatters won the right to reside on the river banks, then hurricane Hazel brought floods that killed several residents. Since then development along the rivers is not allowed leaving them to be used as parkland throughout the city.

18. The Scarborough Bluffs brought about the currents that built the Toronto islands. The islands were originally shifting sandbars that created a natural harbour where downtown Toronto is now located.

19. Power lines are called Hydro lines in reference to the hydro-electric power generated in Niagara Falls for Toronto.

20. The downtown is interconnected with 27 kilometers of winter friendly underground pedestrian pathways known as the PATH.

21. Toronto invented the concept of the Business Improvement Area (BIA) whereby a retail strip can form an organization and have the right to tax all stores with in the area in order to improve the area with infrastructure, events, and advertisement.  Today dozens of BIA’s are at the centre of vibrant neighbourhoods in the inner city.

22. Buying alcohol for personal use is fairly restrictive, but licensing establishments for social drinking is liberal compared to most of North America.

23. The bylaw prohibiting smoking inside buildings had the pleasant consequence of bars and restaurants building outdoor patio’s throughout the city.

24. Torontonians are not allowed to own Pit-Bulls.

25. For women, being topless in public is allowed as long as it is not done in a sexually suggestive manner (trying to get attention).