Home » Family » What CHEO Means To Us

What CHEO Means To Us

A parent wants healthy and happy children and until March of 2002 I felt confident in my success. We had experienced CHEO’s ER department for what now seems like routine non emergency situations. The warmth of the staff and their ability to stay calm around so many ailing children is a warm fuzzy that you must share.

My Mother and Grandmother both passed away in their early twenties, suddenly and without explanation. I was my Mother’s only child. I extensively researched family medical histories but always received the same head scratching question marks. Every doctor I consulted told me, “It’s likely a coincidence.” I wanted to believe that. I wanted children of my own and my concern was whether there was anything genetically that I should be aware of.

When I moved to Ottawa in 1993, I had no idea how pivotal CHEO would be in my life. My cousin Diane Weatherdon from our family branch born and raised here, has 3 decades of experience working at CHEO. We discussed my Mother’s autopsy results and the scraps of medical information I was able to dig up. She had asked around among doctors at CHEO for insight but no one was able to offer any further explanations . I decided it was time to move on and begin my family despite the remaining mystery of two sudden post partum deaths of women in their early twenties.

In March of 2002, I was in my second trimester, second child. The phone rang and Diane was on the other line telling me about a new Cardiologist at CHEO, Dr. Robert Gow. She explained how she had noticed a number of cases with family medical histories similar to mine. She mentioned us to Dr. Gow and he suggested I bring in my then 3 year old daughter Sydney. I remember thinking that it would end like all the other appointments. All good, off you go, mystery unsolved, have a happy life.

Sydney was diagnosed with a genetic heart condition called Long QT Syndrome. I was referred to the University of Ottawa Heart Institute and ended up with the same diagnoses. I was told there was a 50 percent chance of passing this onto my unborn child. Worst case scenario for Long QT Syndrome, sudden death. Highest risk period, post partum months. Triggers, emotional & physical stress. There are no words to adequately describe my level of anxiety and denial at the time. I felt like a failure. I am a Mother and I should protect my children not give them a life threatening syndrome.

Medication was prescribed to reduce the risk of any episodes which could include fainting, loss of consciousness and of course sudden death. Suddenly there were all kinds of restrictions on activities. No competitive sports or intense exercize. That ended my sprint training routine. The side effects of the beta blockers can also include extreme fatigue, dizziness, confusion, blurred vision, fainting, sshortness of breath, sweating, swelling of face, fingers, feet, or lower legs. The lifestyle adjustments took time to accept. It also took me a few weeks to decide to take medication to protect myself as I was in conflict over that versus how it would affect my unborn child. I was advised that I would be protecting my children by protecting myself.

Two weeks before my due date, the doctor tells me I am too high risk and I need to be closer to the Ottawa Heart Institute instead of delivering at the Queensway Carleton. Too late, I’m in labour. Where’s my baby? Bring her back. Her heart rate is in the 50’s. Newborns average 100 – 160 beats per minute. Wait. I’m not leaving her. Let me in the ambulance. NO. Doors slam. You stay and rest. (Insert appropriate foul language) and I follow the ambulance.

Anxious and panicked, I arrive at CHEO. I frantically search for the Neonatal Intensive Care Unit and the cluster of nurses and doctors surrounding my still unnamed child. She’s wailing as they push needles into her tiny head. I’m paralyzed with fear. A pace maker, NO. Surgery on my newborn! Please let me hold her. It was a wait and see situation. Throw my history of depression and anxiety into the lack of sleep mix and you’ve got some very messy moments. Every night I would hold my precious gift into the wee morning hours then rush home for a few hours of sleep, kiss my three year old Sydney awake and then scramble back to CHEO to nurture my days old, struggling infant.

Thankfully, love, faith and strong will helped pull her through and Grace is now a thriving 10 year old. No surgery was necessary and she is also taking daily medication to reduce the associated risks of Long QT Syndrome. Her big sister, 14 year old Sydney is also flourishing on the same medication. Genetic testing has helped pinpoint the gene responsible for the Long QT. We navigate the challenges as they come. I consider them healthy children. We have lifestyle considerations and restrictions that not everyone understands. Sometimes it can feel like we don’t fit in. But how many 10 and 14 year olds know how to use a defibrilator?

I am infinitely thankful for CHEO and the world class skills and expertise of the staff. More importantly, kids are treated like superheroes. Having this superior facility with the bedside manor of angels in our own backyard is a great comfort, especially for a single Mom overcoming her own fears and obstacles to be a better example each day. 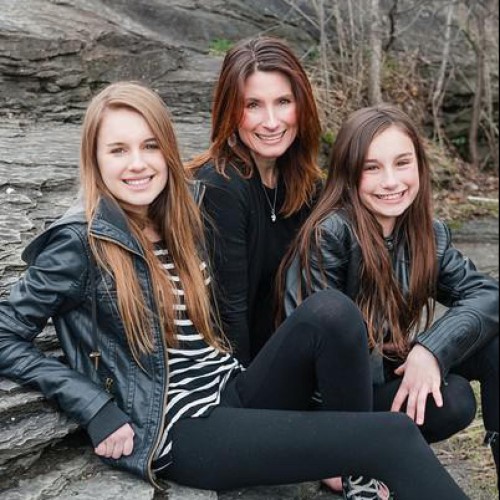 Katherine
How do you rebuild your life after family trauma and during mental health challenges when you feel your grip on hope is slipping? Katherine Dines is on the infinite journey of happiness and learning to thrive with forgiveness & gratitude. Katherine Dines is a Mother and voice actor, based in Canada's Capital, with international credits on projects including Hasbro's Tropical Tycoon Monopoly & Warner Brothers' Friends DVD Trivia Game. Juggling the demands of single parenting since 2002, Katherine is currently sharing her passions on the airwaves of Majic 100.3 FM Radio while navigating opportunities to express through film, tv & internet projects. Love, laughter & inspiring music rank at the top with love for her daughters motivating her enthusiasm for self discovery and healing.

12 Fun Things to Do in Syracuse, New York this Summer