July 11, 2016
by Pieces of Me
Facebook2PinterestSMSYummlyShare
2
SHARES

Summer is a time for kids to let their hair down and have fun. There are some days where kids are at home and feel as though they have nothing to do. For days like this, I like to get my kids involved in doing something interactive and that they can learn from while they are playing. I am happy that HEXBUG® asked us to review some of their robotic toys that allow kids to become interactive through building structures and play.

HEXBUG wants to provide children with a positive experience with robotics from a young age. They are passionate about robotics, and their passion is shared by users who are amazed by their product’s accuracy to mimic their bug-like attributes.

Below are the products my family received to review:

My kids could not wait to play with their battle bots! Once out of the package, they each gravitated toward a different bot to play with. Each bot could also be controlled on two separate channels for different battle or racing modes.

My daughter fell in love with the HEXBUG® Fire Ant. It has a cute design, is bright and colourful. Once she started using the remote controls, she loved making it spin around in circles around our dining room table. When she let it loose, it was REALLY fast, and she loved trying to keep up with it. Our ant also lights up, and my daughter really enjoyed this feature.

Since my little guy is all about spiders, he could not get enough of the HEXBUG® Battle Spider. Its long legs carried its alien-like body around with the aid of its remote control. It makes noises when the channels were toggled when it becomes damaged and while it fires its infrared beams at its opponents. It also crept along our table a bit like a spider would while stalking its prey before it attacks. He really liked his new spider friend.

My kids had fun trying to get these two bots to battle each other. I don’t think they were intended to do battle with each other, but it was fun to see my kids try to manoeuvre their bug friends to crash and bash their friends together. Check out the video to watch how our epic battle played out! 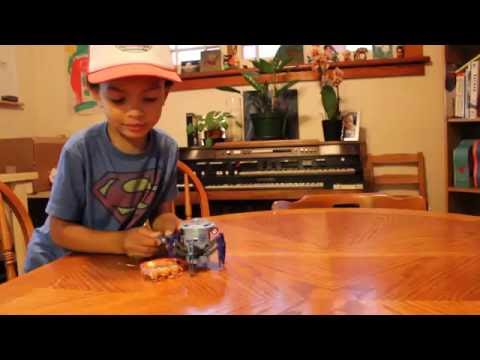 Both of my children enjoyed playing with the VEX® Robotics Robotic Arm. Though they were too young to be able to put together themselves, they had fun being my assistants, giving me the pieces I needed to put together this construction kit. This TOTY (Toy OF The Year) Awards 2016 winner allows builders to control the knobs to be able to pick up objects close by with its claw.

This kit is great for rainy days as it took a few hours to complete. The instructions were easy to follow, and, thankfully, a few extra pieces are provided, just in case some of the smaller pieces fall become lost during a build.

Once completed, the kids and I had fun twisting the knobs and trying to pick up objects with the claw. This robotic arm is even able to turn 360 degrees, so it does not have to be picked up and turned around to reach objects not directly in front of it.

This kit is also able to be reconstructed into two different toys: a scorpion and a helicopter.

Overall, we really enjoyed building and battling with our robotic toys from HEXBUG. The HEXBUG® Fire Ant and the HEXBUG® Battle Spider bots were fun to learn how to use and the kids loved battling with them. The VEX® Robotics Robotic Arm was a great way to spend time together with my kids while constructing a robotic arm we could use to pick up all sorts of objects. We now have even more fun ways to spend our time indoors and out when we are at home this summer.

Disclaimer: I received products from HEXBUG® in order to write this review. The views I shared are my own.

Get Crafty with Rock Painting

Once Upon A Time: Telling A Story

How To Make A Kids Bath Scrub

5 Fun Christmas Activities For The Family

You Know You’re Canadian When….