Disney on Ice: Worlds of Fantasy (A Review)

My daughter and I have been to several Disney on Ice shows as well as Disney Live! Mickey’s Rocking Road show. At the moment, her favourite Disney character is Bullseye from the beloved trilogy of Toy Story movies, so when she saw a commercial for Disney on Ice: Worlds of Fantasy she was ecstatic at the thought of seeing Bullseye on skates (she knew horses could skate from last year’s Disney on Ice: Princesses and Heroes when Rapunzel’s horse briefly skated).

We were lucky enough to be invited to the opening night performance of Disney on Ice: Worlds of Fantasy on Wednesday, February 25th at the Canadian Tire Centre. My daughter was so excited for the evening that she woke up wondering how many hours it would be until the show started.

The show opened with the infamous Mickey and Minnie Mouse (and eventually Donald and Goofy too) greeting the crowd in a cute little red car. Shortly thereafter the car mysteriously breaks down leaving them wondering where they could find a good tow truck. In came Tow Mater and his friends from the Cars movies, including Lightning McQueen himself.

When my daughter was around three years of age she absolutely adored the Cars movies and I think tonight rekindled her love for them. She was all smiles and awe as she watched the cars try and maneuver and “drive” around the ice. It was a great scene that I wished had lasted a little longer.

Following the Cars act was a brief recreation of The Little Mermaid, complete with Sebastian, Ariel and the evil witch Ursula, whose costume was so scary even my husband was a bit scared of her. The music and fun colours of this scene never disappoint and the music always makes people in the audience sing aloud.

I think the most scenic of the acts had to be Tinkerbell and the fairies. Between Queen Clarion majestically flying in the sky, the bouquet of spring flowers surrounding the ice surface and Tinkerbell herself floating around sprinkling fairy dust, one couldn’t help but smile throughout the performance. 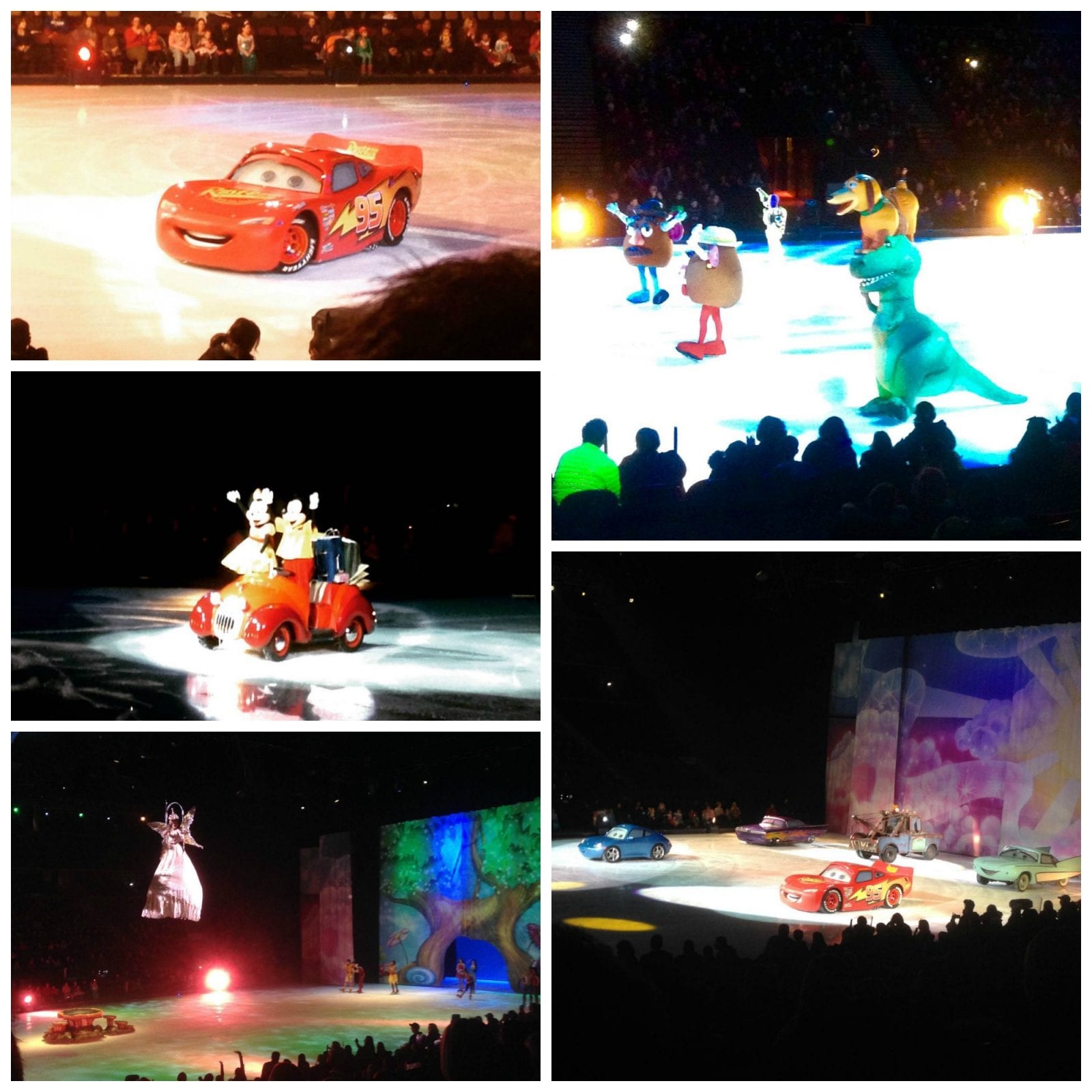 After a brief intermission, Mickey, Minnie, Donald and Goofy returned to the ice briefly to introduce us to the magical world of Toy Story. My daughter seemed a bit confused as to who this Andy kid was and why he was skating around with a mini-Woody when Woody was the real star of Toy Story (and Bullseye, of course), but it wasn’t long before the “toys were back in town” and the crowd was clapping along with them (except maybe with Rex 😉 ). The surprise stars of this act were Barbie and Ken who were not only talented skaters, but funny too.

The most memorable part of the show for my daughter was seeing Bullseye on skates. She was very happy that he got more ice time than Rapunzel’s horse had in the Princess and Heroes ice show (and also mentioned she hopes Disney will produce a Disney on Ice Show JUST for the horses… hint, hint Disney).

If you have waited for Disney to include Cars in an ice show then this is the time to go! Disney on Ice: Worlds of Fantasy is also perfect for those who love Tinkerbell, Toy Story and, of course, The Little Mermaid. The familiar Disney tunes will have you singing along from beginning to end and I guarantee that as soon as the house lights turn on and it’s time to go home, your kids will be asking when the next Disney on Ice show is.

Disney On Ice – Worlds of Fantasty will run from February 25th until March 1st, 2015 at the Canadian Tire Centre in Ottawa. Ticket prices range from $15 up to $72,

You can purchase tickets to the show, by clicking HERE!

Click here to purchase tickets to a Disney On Ice show near you!

Disclosure: I received something of value from Feld Entertainment as part of their Insider Program. I was not required to write a positive review. The opinions expressed are my own.

How To Explain Sex To Kids

Activities For Toddlers To Do With Parents