Each year, Canada’s Capital Region glows with thousands of holiday lights during Christmas Lights Across Canada. These family activities in Ottawa consist of a pathway of lights in Canada’s Capital Region, IllumiNATION — A celebration of the winter solstice, and a multimedia projection on Parliament Hill. These Ottawa free events are perfect to spend time with the family! 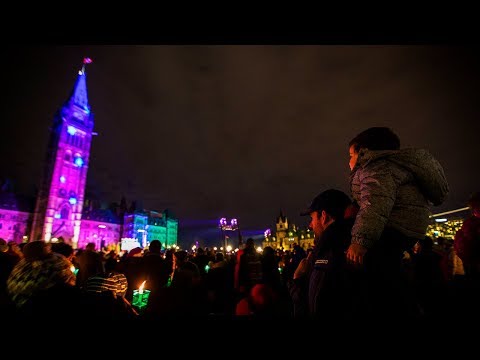 About Christmas Lights Across Canada

The Christmas Lights program was launched in 1985 to brighten the Ottawa winter. At first, the lights were only on Parliament Hill, but over the years the program expanded. Now, Ottawa and Gatineau glow each winter with Christmas lights at over 60 sites along Confederation Boulevard.

The program also grew to include our 13 provincial and territorial capitals, becoming Christmas Lights Across Canada. Throughout the country, Canadians come together each year to brighten their wintery capitals with thousands of holiday lights.

Christmas Lights Across Canada is supported by partners in the national, provincial and territorial capitals of Canada.

To view each year’s dates, please visit their website!

A new multimedia projection show is offered on Parliament Hill. The presentation combines colourful digital imagery with a captivating soundtrack.

In Canada’s Capital, the winter landscape glows with over 300,000 multicoloured lights during the holiday season. The holiday lights that brighten Confederation Boulevard, Canada’s ceremonial route circling the heart of the Capital. The Boulevard encompasses Wellington Street, Mackenzie Street, Elgin Street and Sussex Drive in downtown Ottawa, as well as Laurier Street in Gatineau and the Alexandra Bridge.

Follow this illuminated route between Ottawa and Gatineau and admire the sites and monuments along its way:

IllumiNATION — A celebration of the winter solstice

Every year, an illumination ceremony is held on Parliament Hill. The evening usually features musical performances, a colourful pyrotechnics show and a projection of the Winter Lightscapes show. Guests are invited to arrive early to the ceremony and enjoy free BeaverTail pastries and hot chocolate, while supplies last.

Hope you will attend these Ottawa events with your family!

How to Break Children’s Bad Habits