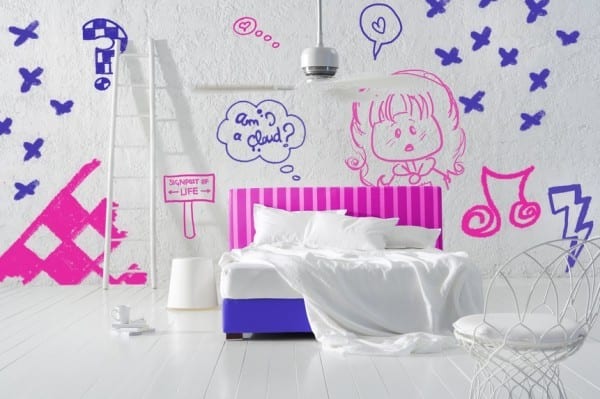 The Important Role of Decor in Nurseries & Kids Rooms – Tips

I have many times walked into a child’s room and wanted to just sit there and soak up the wonderful energy.  The feeling of happiness, of imagination, of being carefree.  The amount of personality in kids rooms is beyond anything I have ever experienced in any other space.

When I am decorating nurseries there are a lot of important developmental psychological elements that I use in the decor.  For example- did you know that an infants sense of sight develops gradually over 6 months?  They cannot see as we do and it is crucial to stimulate this sense in the first months of life.  For this reason I like to use visually stimulating concepts when decorating a nursery.  Using certain colours, sounds, and textures have been proven through psychological studies to aid in the growth and stimulation for infants both mentally and physically.

I remember as a child constantly moving around the furniture in my room, pinning things to ceilings and walls (much to my parents annoyance), and how exciting it was to get new sheets or curtains.  I get much the same feeling decorating children’s rooms.
It’s important that children have a space of their own that will allow them to let their imagination soar, and their minds grow. Children need a spot of their own that speaks to them.  A go-to place that provides security.  Somewhere that fully allows them to imagine, and create – to be a safari hunter on a magnificent adventure, or a princess waiting for a prince. Their room will later grow into the place where they write all their secrets and dreams in, come up with their best ideas, share stories with friends, and retreat to when they feel like no one understands them.

Whether it’s a nursery, a tween room, or a young adult, providing the space that contributes to their function, development and imagination is important.  When I have finished decorating a child’s  room and they say thank you and give me a big hug, I always have to say thank you in return – thank you for inviting me into their world and taking me back to a time of simple innocence and imagination that reaches far beyond the moon!

Previous articleStaining Your Deck
Next articleYou Know You’re Canadian When….

Surprising Things You Can Clean with Lemon