May 12, 2016
by Pieces of Me
Facebook152PinterestSMSYummlyShare
152
SHARES

The days are getting longer and warmer, so you know what that means: summer is on its way! There are some days during the summer when you want to have a quick cool-off to beat the heat. Zuru Bunch O Balloons asked us to review their Rapid Fill 3 Pack and Launcher Set as well as their Rapid Fill 3 Pack to see if they could help splash in the summer season in a cool and fun way!

Bunch O Ballons makes cooling off during the dog days of summer a smashing success! You are able to fill over 100 of self-tying water balloons in a snap. It’s as easy as 1-2-3!

Watch this video to see how quick and easy it was to fill our balloons. 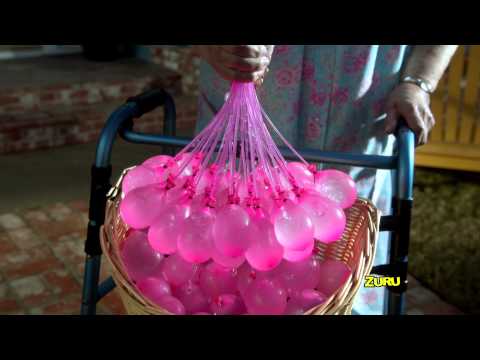 The set we received was the newest one for 2016. It is a Launcher set with a lightweight and aerodynamic launcher! Now kids can toss their balloons up to 60 feet away!

It was VERY hard to keep our kids at bay while setting up our water balloon wonderland. They were itching to start tossing them to see them explode! This is what 100 Bunch O Balloons looks like.

We then piled the balloons into our wagon to transport them to our driveway to start our smashing party!

Since our lawn was not a glorious sea of green yet, we decided to take the fun to our driveway. Though our kids are at the recommended age for this toy (Ages 3+), We felt that it would be safer for them to throw the balloons against the side of our home. Once my kids started tossing the balloons, they couldn’t stop! My daughter loved using the launcher to send her balloons to a smashing end against the outer wall of our home. Our kids were sad when they were out of ammunition.

This was the aftermath of their fun.

The kids were great when it time to play clean-up. Many hands made quick work and it took minutes to have our driveway back to normal.

One note to make where this toy is concerned: fill the balloons with something to catch the balloons. Some of the balloons filled quicker than others, and we lost a few friends when we didn’t follow this step. It also helps to avoid getting sprayed by those that sprung a leak during filling. Luckily, we had more than 100 balloons in our kit to play with!

Check out how “pop”ular Bunch O Balloons are in other countries around the world:

My kids had a blast cooling off with Zuru Bunch O Balloons! They can’t wait to be able to be able to splash about with it this summer with their friends!

Disclaimer: I received products from Zuru Bunch O Balloons in order to write this review. The views expressed are my own.

6 Easter Weekend Activities To Do With The Family