Getting to Know Will Stroet of Will’s Jams

November 17, 2014
by Pieces of Me
FacebookPinterestSMSYummlyShare

My children love music.  When they a great song, they cannot help but to get up and dance and sing along to it! I also love if there is a video for my children to watch so they can see the performer and have fun with them on the screen.  This is why we are all huge fans of Will Stroet, the star of Will’s Jams on Kids’ CBC. 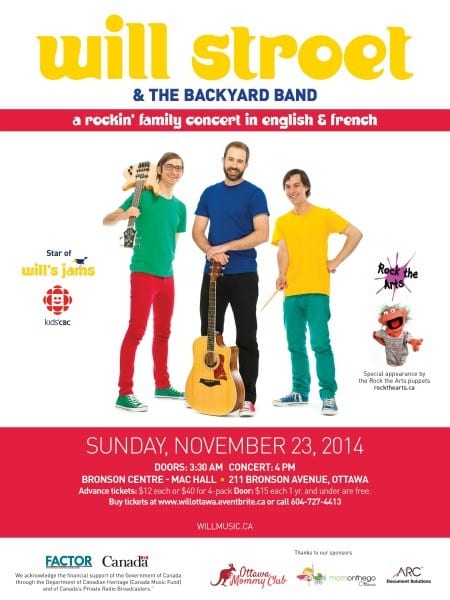 I was really to have  the chance to interview Will Stroet. Whether you and your kids are also fans, or if you are unfamiliar with this award-winning singer-songwriter, you will find that Will Stroet is a very fun and interesting person.

Me: What made you want to become a children’s entertainer?

Will Stroet: I started doing it for fun when I was studying to be a teacher at the University of BC. My fellow teacher candidates, instructors and students at my practicum school all liked my songs so I kept writing and put out my first CD at the end of 2005. After a few years of pursuing it as a side project I realized how much I loved performing for kids and once I felt I had a chance of making a living doing something I loved I went for it full time!

Me: What did you do before becoming a singer/songwriter?

Will Stroet: I was a French Immersion Music Teacher at Lord Tennyson Elementary in Vancouver. It was a fun and very busy job, and during that time I really started writing songs for kids. A lot of the songs I wrote at that time were inspired by my students. Also, the songs I was writing in French (with my mother and another teacher colleague) were also great resources for me in my classroom.

Me: What other “hats” do you wear besides singer/songwriter/performer?

Will Stroet: My favourite “hat” is that of Dad. I have two wonderful daughters who keep me very busy when I’m at home. We also recently ventured into TV where we have a short program called “Will’s Jams” that airs on Kids’ CBC three mornings a week. I run my company Pebble Star Productions with my wife Kim Thé (I have to admit she does all the real heavy lifting here!). I also enjoy leading workshops for teachers and residencies for students mostly around using music to enhance learning in the classroom. Finally, I also sit on the Board of Directors of an amazing organization called ArtStarts in Schools who bring the arts (performances, residencies) into schools across the province of BC.

Me:  Which do you prefer most: the creative or performance aspect of this industry?

Will Stroet: The simple answer here is I love both. I have to admit I spend a lot more time performing than creating these days. My touring schedule sees me doing between 160-200 shows per year!

Me: When and how did you and the Backyard Band meet?

Will Stroet: I met Elliot, my bass player, when he was in grade 6 and I had just graduated from high school. I volunteered for a Vancouver School Board mentorship program that teamed me up with him. We played guitar together, wrote some songs and at the end of the project performed our songs for the rest of the mentors, mentees as well as our families and theirs. I lost touch with him until about 5 years ago when I was speaking to his mother who worked at a local school district. I asked her how Elliot was doing and she informed me that he had just graduated from music school. I called him up and he joined the band that week. He has now done over 500 shows with me!

My drummer Kevin is Elliot’s roommate. It’s not quite as exciting a story but that is how I met him and he joined the band.

Me:  What inspires you to write music?

Will Stroet: When I started, it was my students. Now it is definitely my own children and their friends. There is no shortage of inspiration around here these days!

Me: When did you start your love of music?

Will Stroet: I started playing music as a 4 year old. My first instrument was the violin, an instrument I played for nine years. I have to admit that I didn’t always love playing the violin as a kid. It was my parents’ idea so practicing was definitely a challenge most days. Looking back I do however really appreciate my parents determination to keep me involved in music. I learned so much as a child about music – it is definitely the best time to learn. When I picked up the guitar as a 13 year old that is when I really began to LOVE music.

Me: Where are some of your favourite cities to perform?

Will Stroet: We perform almost entirely in Canada, and we’ve performed in almost every province in the country. My favourite city to perform in, however, is my hometown of Vancouver because when I play here my kids get to come to the shows. I love seeing my girls in the audience.

Me: Do you have another album set to be released? If so, when and will it be in English, French or bilingual?

Will Stroet: Our next big “release” is not an album but series 3 of “Will’s Jams” on Kids CBC (you can watch series one and read about the others online). The new episodes will begin airing in November and feature mostly the music from my latest album “Just Imagine.” As far as another album’s release I have been writing, and am hoping to go into studio in the spring/summer. We don’t have a release date in mind yet and I’m hoping the album will be bilingual.

If you want to view videos of Will’s Jams on Kids’ CBC, you can click on the video below to enjoy his music!

You can also enjoy new episodes of Will’s Jams on Kids’ CBC by following this schedule starting in November.

You can also connect with Will Stroet on Facebook

Do you and your kids love to dance, jam and sing? If so, you and your family can attend Will Stroet live in concert at Ottawa’s Bronson Centre on Sunday, November 23 at 4 pm. Will and his Backyard Band will sing songs in English and French and will have you cheering for libraries, loving your bike and rallying for vegetables with your dinner — all while you’re on your feet and dancing away! Rock the Arts Puppets, an Ottawa based puppet company, will be hosting this event! For more info about Will and his music, visit www.willmusic.ca. For event info, visit www.willottawa.eventbrite.ca.

Donate Your Spring Cleaning Items to these 5 Local Charities

6 Tips to Teach Kids About Nutrition