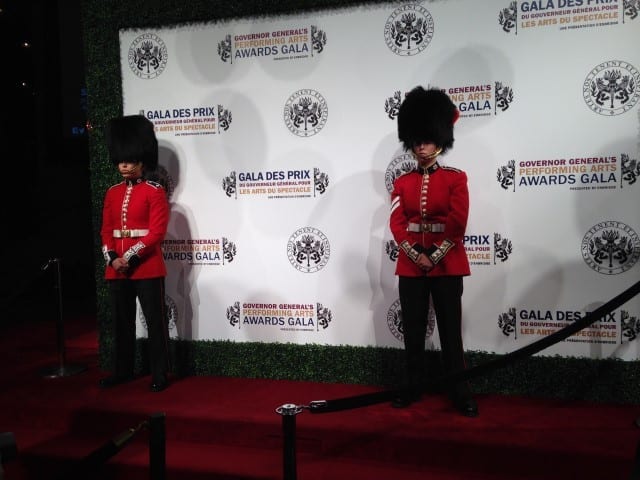 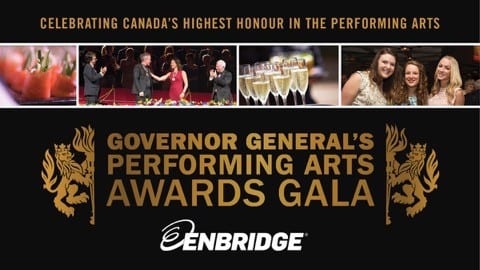 Each year, Governor General’s Performing Arts Awards are presented for Lifetime Artistic Achievement in the categories of theatre, dance, classical music, popular music, film, and broadcasting. These awards recognize artists who have made an indelible contribution to Canada’s cultural life. Recipients of these awards are nominated by the general public.

Two complementary awards are also conferred each year. The Ramon John Hnatyshyn (RJH) Award for Voluntarism in the Performing Arts, which recognizes outstanding contribution by an individual or group in voluntary service to the performing arts in Canada. This Award is also nominated by the general public.

The National Arts Centre Award, which recognizes the work of an extraordinary nature by an individual artist or company in the past performance year. Recipients are selected by the NAC Board of Trustees from a list of candidates proposed by a nominating committee of NAC artistic programmers.

The award recipients receive the following:

This year, the Governor General’s Performing Arts Awards Gala was once again held at the National Arts Centre on Saturday, June 11th. The Gala evening began at 6:30 in the Foyer of the NAC with a pre-show reception with wine, beer, and canapés, followed by the red carpet arrival of the laureates, and of course, Their Excellencies the Right Honourable David Johnston, Governor General of Canada, and Sharon Johnston and other VIPs at 7:00 pm. Performances, tributes, and short films to this year’s Award recipients took place in Southam Hall at 8:00 pm, followed by a champagne after-party with delicious desserts and dancing. Suzanne Rogers, Toronto Philanthropist, is the Honorary Chair of the Governor General’s Performing Arts Awards Gala National Committee. I had the pleasure of attending the gala with my husband for the first time and really enjoyed the event!

This year’s Gala celebrated singer-songwriter Susan Aglukark, tenor Ben Heppner, contemporary dancer Marie Chouinard, playwright Suzanne Lebeau, the film producer Robert Lantos, recipient of the NAC Award and as well as John D McKellor, who has received the Ramon John Hnatyshyn Award for Voluntarism in the Performing Arts. Unfortunately, due to a throat surgery, Michael Bublé could not attend, therefore he will receive his award in 2017.

Susan has released 8 albums since 1990 and is a well-know Inuk singer and songwriter. Her music is a blend of country, world music, and pop inspired by her Inuit culture and by the issues facing Canada’s aboriginal people.

Ben is an acclaimed operatic tenor well know around the world for his powerful voice that has led him to perform on prestigious opera stages. He retired in 2014 and now shares his musical passion as a host of CBC radio’s “Saturday Afternoon at the Opera” and “Backstage with Ben Heppner”.

Marie is an internationally recognized creator and dancer of contemporary dance. She is also an author, designer, photographer, filmmaker, and multimedia artist. In 1990, she founded “Compagnie Marie Chouinard”, a dance company renowned on world’s major stages and at festivals.

Suzanne’s contribution to more than 40 years as a children’s playwright and an artistic director has made her a pioneer in contemporary theatre for young people. In 1975, she founded “Le Carousel Theatre Company” with Gervais Gaudreault and has written over 30 plays for them.

Robert is a well know film and television producer for over four decades. He is the founder of Alliance Communications Corporation, Canada’s first major production and distribution studio. He produced, invested, and exported to the world films by Denys Arcand, Jean-Claude Lauzon, Atom Egoyan, David Cronenberg, Patricia Rozema, and many more.

John has been volunteering for over 50 years with arts organizations in Toronto and beyond. He is a tireless advocate for public policy that encourages and promotes arts and culture in Canada, a generous donor as well as a legal advisor.

The awards also feature a unique Mentorship Program designed to benefit a talented mid-career artist. The program brings together a Past Lifetime Artistic Achievement Award Recipient with a next-generation artist, helping them to develop their work, explore ideas, and navigate career options. This year, Benjamin Pradet, a playwriter, won the Governor General’s Performing Arts Awards Mentorship Program. Albert Millaire, a previous Lifetime Artistic Achievement Award Recipient, know for six decades on stage and screen as an actor, director, and arts advocates, will be his mentor.

Also in attendance at the gala, was Amanda Rheaume whom sang the O Canada, the Royal Canada Air Force March Past, the Governor General’s Fanfare as well as Chantal Kreviazuk whom sang the final song.

In 2017, the Governor General’s Performing Arts Awards Gala will be celebrating 25 years in a renovated National Arts Centre!

The Governor General’s Performing Arts Awards Gala certainly did not disappoint me with its delicious food, wine and champagne, amazingly funny and heartfelt tributes to the laureates, spectacular performances and music by the NAC orchestra, and let’s not forget the beautiful ladies wearing long gowns or cocktail dresses, and the handsome men in black tie that attended the Gala!  It’s definitely worth a night out on the town with friends or your spouse! I wish my cellular phone would have taken better photos, but the laurates were walking fast down the isle and I was far from the main stage in the hall. Next year, I will bring my DSLR camera!

Previous articleHow to Raise Confident, Healthy, Happy Children
Next articleChange The Way You Feed Your Children With a Little Menu Planning

How To Save Money Easily

Tricks to Get Your Child to Sleep Faster and Better